Rajasthan in every sense is the land of living history. At every nook and cranny of the state there is something which represents the tale of some centuries old. The district of Alwar is situated around 150 km north of Jaipur. The district houses some of the oldest heritage buildings of India. Neemrana Fort is one of those ancient heritage forts which is still standing proudly on its feet and pronouncing the old glory of royal Rajasthan in the midst of a melancholy surrounding. 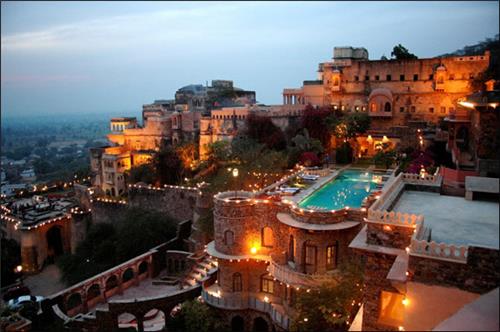 Neemrana, also known as Raath region is the industrial hub of modern-day Rajasthan and located in Behror tehsil . The name of Neemrana derives from a local fearless chieftain Nimola Meo. The fort of Neemrana was built in 1467 AD by Raja Dup Raj and situated on a hilltop of Aravalli and surrounded by a splendid view. This site has the direct lineage of Prithviraj Chauhan III who was defeated and consequently killed by Mohammad Ghori in 1192 in the battle of Tarain. The descendants of Prithviraj Chauhan shifted the Chauhan capital from Mandhan to Neemrana after the establishment of the fort. It was the third capital of the Chauhans.

The magnificent fort had a total area of 25 acres and rises above 10 levels. But during the British Raj, Neemrana Fort started facing dilapidation and in 1947 the then King Raja Rajinder Singh moved down to Vijay Bagh as the Fort had become impossible to stay at. The king tried his best to give the fort away from his responsibility but there were no taker of this once pride of the Chauhan dynasty. In 1986, after a long wait of 39 years, the ramshackle Fort was acquired for the restoration work and in 1991 the Neemrana Fort-Palace was re-opened as a Palace-hotel with 15 lavish rooms available.

The Neemrana Fort-Palace is declared a Heritage-Hotel and now a crown jewel of the Neemrana Group Enterprise, a hotel chain. The Neemrana Fort has been wining several awards for its resplendent features and wonderful restoration works. Now, the fort is a work of marvel with 71 suits and all the modern elements to equip it for a plushy stay and is a common shooting place for several bigwig Bollywood and Hollywood ventures naming Bodyguard, Rang De Basanti, Eklavya and various others.

The fortress is arranged in as many as ten levels with numerous lanes, tiny passages, spiral staircases, courtyards and open terraces. These terraces are distinct in design as these were meant to have an aerial view of the surrounding areas from there. The architecture of the Neemrana fort combines both the traditional Rajasthani with the British Colonial style. The rooms of the fortress are designed strategically to adapt to the local climate. There is also an aqueduct from the 18th century which should be visited during the trip to the fort. It was once the only source of water in the whole Neemrana and is still in use to channel the water to the main Palace.