A Chhatri is basically a dome shaped pavilion, which was famously used in the Indian architecture. They are the pride and honor of Rajput and Mughal architecture. Widely used in several palaces and forts during the pre-historic era, Chhatri’s were typically used to depict funeral sites.

Moosi Maharani Ki Chhatri in the city of Alwar is one of the most beautiful and mesmerizing Chhatri’s in the Indian state of Rajasthan. It is made out of stunning red sandstone and consists of white marble cenotaphs of the rulers of Alwar.

Moosi Maharani Ki Chhatri is one of the most popular Chhatri’s in Alwar. It was built by Maharaja Vinay Singh, who constructed it in the honor of Maharaja Bakhtawar Sight and his wife – Rani Moosi in the year 1815. Thus, this particular structure holds a significant amount of importance in the history of Rajasthan.

It is believed that Queen Rani Moosi committed ‘Sati’ (an act of self-immolation by a widow during her husbands’ funeral pyre). Moosi Maharani Ki Chhatri is home to the tomb of the king and queen and is structured on pillared sandstone. One might even see many women, who come to the tomb to pay their homage to the queen.

Situated right outside the famous City Palace in Alwar, with the beautiful Aravalli Hills as the background, Moosi Maharani Ki Chhatri is a two storied structure. The upper story is made completely out of white marble stones with polished roofs and impressive bends. 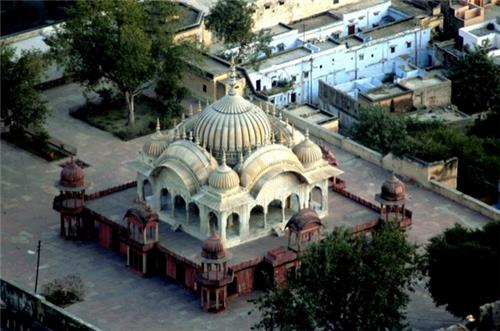 The interiors of the Chhatri are embellished with striking wall paintings offering glimpses of Indian mythology and court proceedings in Alwar during that time. The Chhatri is also surrounded by vibrant foliage and flora, making it one of the most beautiful areas around Alwar. Moreover, if you are lucky, one might even be able to spot several visiting peacocks and other rare birds dancing.

Tourists can also visit the huge water tank located in the vicinity of Moosi Maharani Ki Chhatri. The Baoli or Kund is a popular step well in alwar, which is lined with steps with intricate carvings on three of its sides. It is a perfect example of the kindness shown by the rulers of Alwar during that time.

The dual attraction of the Chhatri and the step well consists of a lot of historical important and attracts several foreign and local tourists. 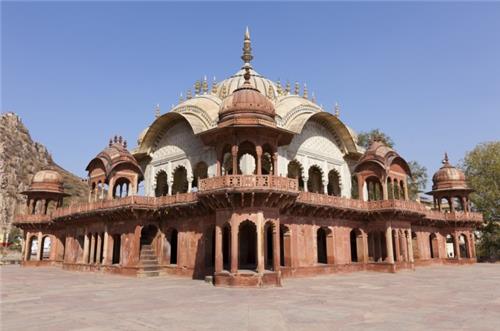 The best time to visit Moosi Maharani Ki Chhatri is between the months of September and March, when the weather is quite pleasant.

Moosi Maharani Ki Chhatri in Alwar remains open from 9 in the morning till 4:30 pm in the evening, and is open on all days to the tourists except Fridays. Moreover, entry to this famous monument is free for all visitors.

The best way to reach Moosi Maharani Ki Chhatri is to either hire a taxi or catch a bus that runs daily from the center of Alwar city and the Chhatri.