Company Bagh (Garden in English) or Purjan Vihar in Alwar is a stunning garden that boasts of lush green surroundings and beautiful well maintained lawns with an extensive promenade. It is one of the most attractive tourist destinations in Alwar in the Indian state of Rajasthan and is visited by thousands of visitors every year. Situated in the sandy region of western India, this luscious green garden is often called as a haven in the middle of Thar Desert. 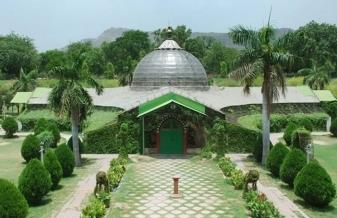 Located adjacent to the famous City Palace in Alwar, Company Bagh or Purjan Vihar is one of the few places in the city that is not at all affected by the extreme weather conditions that take place over here. This beautiful and aesthetic garden has become a landmark attraction of Alwar. Company Bagh was created by Raja Shiv Dan Singh during the 19th century and it still retains its splendid beauty till today.

This magnificent garden is known for its eye-catching ‘Chattri (Umbrella)’ with its extraordinary Bengali top and bends, located at the heart of this verdant greenery. Apart from its remarkable foliage, this garden also boasts of a prominent structure called the ‘Shimla House’, which is known for its huge vault shape dome. Built by Maharaja Mangal Singh during the year 1885, this architectural structure used to serve mostly as a summer house to the royals. However, Shimla House has now become one of the most attractive spots of the garden with several beautiful walkways nearby surrounded by luxuriant vegetation.

Besides the garden and its beautiful greenery, tourists can also view Saint Andrew’s Church, located just next to the garden. However, entry to this church is banned to the visitors. Saint Andrew’s Church was constructed during the British Rule for their Sunday adorations. It comes under the Authority of Scottish Churches and is a perfect example of the beautiful Victorian architecture. The church was shut down and it has not been opened ever since.

Company Bagh is open to tourists on all days from 9 am to 5 pm and entry to this place is free for all the visitors.

How to Reach Company Bagh

The nearest railway station to Company Bagh is Alwar Railway Station, which is connected to all the major cities of the country such as Delhi, Mumbai, Bikaner, Agra, Chennai, Ahmedabad, Jaipur, Pali and so on.