One of the most important landmarks of Alwar, City Palace has become a popular tourist attraction in the city. Also known as Vinay Vilas Mahal, City Palace is a perfect blend of Mughal and Rajput architecture. This palace has been well maintained to retain its original splendor and is visited by thousands of tourists from all over the world, who descend to Alwar to witness the beautiful and intricately carved interiors of this palace. 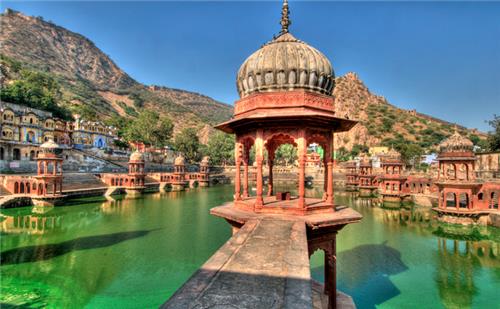 City Palace holds an important place in the history of Rajasthan, which is clearly reflected from the wonderful architecture of its various gardens, palaces, forts and temples. Built during the 18th century by the eminent king – Raja Bhaktawar Singh, City Palace in Alwar once represented the royal lifestyle of the various kings in the state. However, currently the ground floor of the City Palace is used by the government for official purposes.

Structure and Architecture of City Palace

One of the most beautiful palaces in the city of Alwar in Rajasthan, City Palace is a perfect blend of Indo – Islamic architecture with huge entry gates and several stunning marble domes. 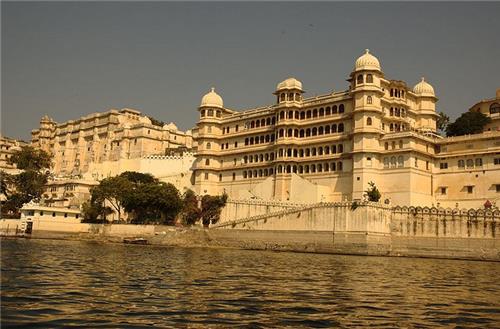 The palace reflects the ornate lifestyle of the Maharajas and even has a beautiful drinking cup that is cut out of a single emerald as a part of its treasury along with a mammoth, a two-storied elephant carriage, in its stables. The ceilings and walls of the palace feature beautiful and exotic murals and paintings with intrinsic mirror work and vibrant colors.

The most exciting attractions of the palace are the huge marble pavilions that are built on several lotus bases. However, the palace courtyard is the one that attracts majority of the tourist attention. It even has a huge water tank, Sagar Kund, which was used to supply water in the olden days. The palace stretches 5 kilometers east to west and stands 1952 feet above the sea level. It is believed that the famous Mughal Emperor Babar had stayed a night in the palace and took away many hidden jewels and treasures to give to his son – Humayun. 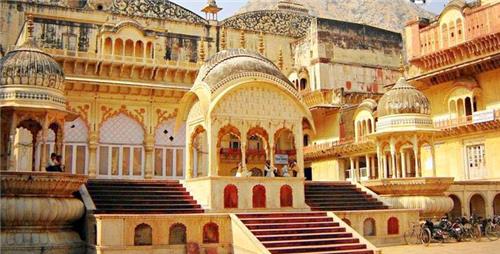 Legend has it that Mughal King Akbar’s son – Jahangir also stayed over here during his exile. The room where he spent his nights is called Salim Mahal. One must definitely visit the golden Durban Hall in the palace, which is known for its spectacular golden and velvet throne on a raised platform. Currently, the palace is used by the Rajasthani government and majority of the halls and corridors on the ground floor of the palace has been converted into offices used by the government officers.

With 51 small towers and 15 tall towers, it can take a visitor about one to two hours to tour the entire palace. There are mainly six entry points namely Jai, Suraj, Kishan, Laxman, Andheri Gate and Chand Pol, each unique in their own way.

The other floors of the City Palace has been transformed into a momentous museum, which was built in 1940 by Maharaja Tej Singh Prabhakar Bahadur, who was the last ruling king in Alwar. The museum houses various unique treasures and artifacts like furniture, manuscripts and armor from the ancient days. 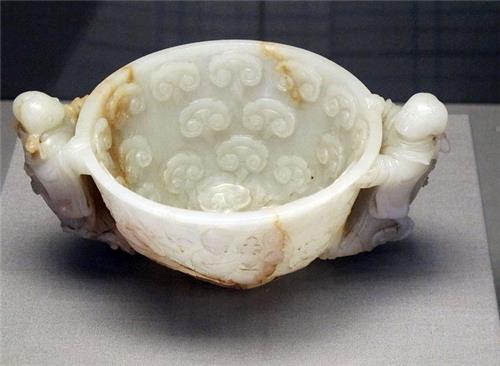 It is divided into three main sections; each displaying different exhibits from royal robes, clay models to ancient weapons, frescoes, paintings and murals. There is also a distinctive silver table in the museum, which was used to by the royals to entertain their important guests.

Tourists can even view the huge collection of rare Persian, Urdu, Arabic and Sanskrit manuscripts in the museum. Amongst these, the most important and popular ones include Waqiat-e-Babri (autobiography of Mughal Emperor – Babar), Gulistan (Garden of Roses) and Bostan (Garden of Spring). Other popular attractions of the museum include royal armory of the ruling kings and a version of Mahabharata painted by the students of Alwar School.

The City Palace is open from 10 am to 5 pm on all days except Mondays. The entry fee for Indians is Rs. 5 per person and Rs. 50 per person for foreigners.

How to Reach City Palace

City Palace is one of the finest structures in Alwar and can be easily reached from any part of the city. Alwar is very well connected by both government and private buses that run daily from the center of the city to the palace. One can even hire a taxi or rent a car to the palace.

The nearest railway station is Alwar Railway Station, which is connected to all the major cities of India and from there; taxis and auto-rickshaws are easily available to the City Palace. The nearest airport to Alwar is in Jaipur.