Situated about 30 kilometers from the beautiful city of Alwar, on the Alwar – Jaipur Road, Bhartrihari Temple is a Hindu temple and also one of the most popular temples over here. Dedicated to Bhartrihari Baba, ruler of Ujjain, this temple of Rajasthan is visited by thousands of devotees every year, who descend to this place with the belief that all their wishes will be fulfilled over here. 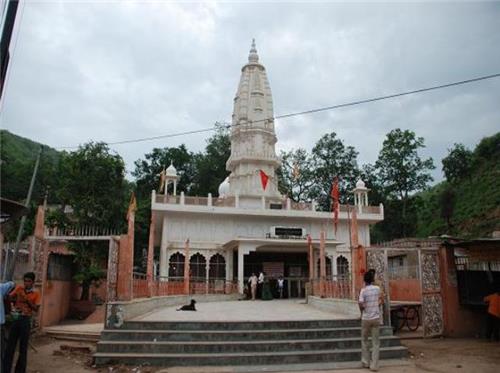 Legend has it that Bhartrihari Baba buried himself alive and this temple was built on his grave. It is believed Maharaj Bhartrihari was a ruler of Ujjain, who gave up his kingdom and worldly pleasures to become a Nath and a follower of Guru Gorakhnath. Several years later, he returned to his wife and asked for something to eat or bhiksha. His wife gave him a fruit to eat, after which he turned immortal.

Some believe that Bhartrihari had saintly powers and can cure even the most fatal of diseases. He once prayed to God to bring water to the city that suffered from a severe drought. God became so pleased with him that he accepted his prayers and a small stream of water started flowing from a nearby rock.

Structure and Attractions of Bhartrihari Temple

Built in a typical Rajasthani style of architecture, Bhartrihari Temple is constructed on top of the samadhi of Yogi Bhartrihari Nath. Every year thousands of devotees and tourists from across the country visit the temple to seek the blessings of the presiding deity over here. There is also a Dhuni (a fireplace kept by the Nath Sadhus), which keeps burning throughout the year. Tourists can also visit the popular sanctuary – Sariska National Park, which is located very close to the temple.

Since the temple follows all traditions of the Nath cult, all festivals related to Lord Shiva are celebrated here with a lot of zest and passion. During the month of Bhadrapad, a special mela or a fair is held over here, which is also the best time to visit, when the temple is all lit up and decorated beautifully. During this month, thousands of devotees and tourists visit the temple to pay homage to the deity.

How to Reach Bhartrihari Temple

The temple is located very near to Alwar, therefore the best way to reach the temple is to either hire a taxi or rent a car and drive down to the temple.