Bala Quila, meaning the ‘young fort’ and also known as Alwar Fort is one of the grandest and the largest forts in Alwar. Perched on a hill top of the Aravalli Ranges, about 1960 feet above sea level, the fort is located 595 meters from Alwar and is clearly visible from the center of the city. It is 1.5 kilometers wide and 5 kilometers in length. 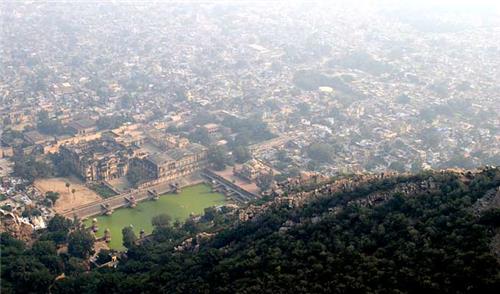 Built during the 16th century, the fort has been standing stall, protecting Alwar, even before the Mughal era and has now become one of the most prestigious monuments of Rajasthan.

Alwar Fort or Bala Quila was built by Hasan Khan Mewati during 1551 AD. In the subsequent centuries, the fort was passed on from the Mughals to Marathas to the Jats and finally, to the Kachwaha Rajputs. 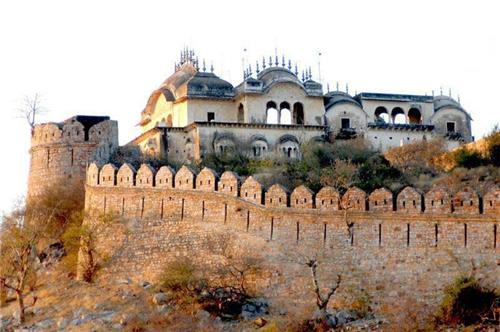 Legend has it that the first Mughal King of India – Babur spent a night over here. During his stay, he took away some of the treasure to give it to his son – Humayun. Later, Emperor Jahangir or Prince Salim, son of the great Mughal King – Akbar, also stayed here when his father banished him from the kingdom because he attempted to assassinate Abul Fazal Mubarak, who was among the nine jewels of Akbar’s court. The room where Jahangir spent his exile in Bala Quila is called Salim Mahal.

Later, during the year 1775, the fort was taken over by Pratap Singh, who was the founder of Alwar State. It is said that Bala Quila had one of the strongest securities in Alwar, which can be seen from its 51 small and 15 large towers located on ridge top of the fort.

Structure and Attractions of Bala Quila

The fort extends 5 kilometers in length and hence, it is one of the largest forts in Alwar. It has six entrance gates, namely, Suraj Pol (which was named after Raja Suraj Mal from Bharatpur), Chand Pol, Krishna Pol, Andheri Gate, Laxman Pol and Jai Pol. It is believed that Pratap Singh, founder of Alwar State, entered the fort through Laxman Pol, which is also the only road that connects Alwar and Bala Quila. Each gate in the fort is associated with stories describing the valor and bravery of Rajput soldiers. 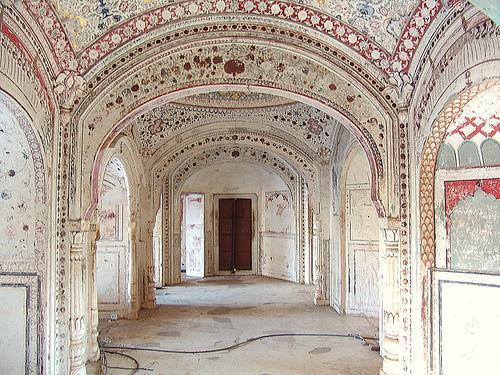 Built in a typical Indo – Islamic style of architecture, the walls of Bala Quila are adorned with beautifully crafted ancient sculptures and scriptures, which would definitely transport you back to the golden era. Each Hindu scripture, also known as Puranas, state that a fort represents the strength of a king. Bala Quila is also home to 446 openings for musketry, which are surrounded by 8 enormous citadels.

Besides beautiful stonework, the fort also houses many other stunning structures such as Nikumbha Mahal Palace, Suraj Kund, Salim Sagar Pond, Jal Mahal and 15 striking temples including Chakradhari Hanuman Temple and Sita Ram Temple. Surrounded by the majestic Aravalli Hills, each structure inside the fort represents the opulence of the bygone era, especially the Nikumbha Mahal Palace, which is built using Bengal caned marble pillars along with large latticed balconies.

The best time to visit the fort is between the months of September and February, when the weather is quite pleasant. Also, one needs prior permission from the Superintendent of Police to enter the fort premises. 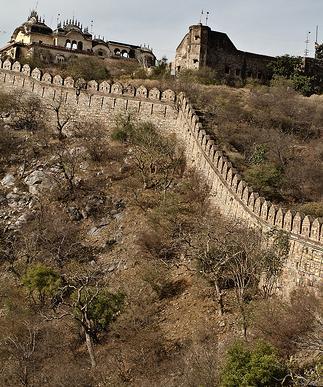 The fort is open for tourists from 10 am in the morning till 4:30 pm in the evening.

How to Reach Bala Quila

Located about 7 kilometers from Alwar, the fort is accessible only via auto-rickshaws or walking through a steep footpath.